The Anderson School has a notable “Green Initiatives” history.

Anderson Recycles! In August 2009, The Anderson School relocated from PS 9 on W. 84th Street to its current location at The O’Shea Complex on W. 77th Street. Faced with the task of relocating from one school building to another, The Anderson community seized the opportunity to incorporate waste prevention, reuse, and recycling. When they discovered there was no recycling program within The O’Shea Complex, Anderson students, parents, and administration banded together to initiate one within their own school, which was then out rolled building-wide.

Anderson established the foundations of a strong recycling collection program, which includes collecting mixed paper, metal/glass/plastic beverage containers, foil, metal cans, and corrugated cardboard boxes from across the school. Students trained as “Trash Troopers” police the recycling buckets in their classrooms and cafeteria, and help educate their class on how and what to recycle. In 2010, The Anderson School won the Golden Apple Award Citywide and Borough Winner Elementary Division for Super Recyclers. (See video below.)

Composting Cafeteria Trays, Food Waste, & Other Waste Prevention! The Anderson School focused on implementing waste prevention, reduction, and reuse programs throughout the school and campus. One key advancement was the PTA’s decision to eliminate disposable Styrofoam cafeteria trays and dedicate funds to replace them with “bagasse” trays made from sugar cane waste. An organic waste collection program was then implemented to collect not only these compostable trays, but food scraps. Anderson’s cafeteria composts more than 100 pounds of organic waste daily. Additional waste prevention and reduction programs include a drastic reduction of paper memos, the sale of waste-free lunch items, and materials reuse drives. In 2012, The Anderson School won the Golden Apple Award Citywide and Borough Winner Elementary Division for Reduce, Reuse, Recycle. In 2011, Anderson’s pioneering efforts paved the way for a District 3 wide composting pilot program, which launched similar programs at PS 166, PS 199, and the Joan of Arc Campus. The success of the pilot led the DOE to expand its composting program to schools across the city. As of 2018, 725 NYC public schools participate in the DOE’s Organics Collection program.

“As a green enthusiast, a producer/director and most of all, a parent, I’m very excited to be sharing this video.
You too can make a change in your schools – it can be as easy as abc’s and 123’s.
To quote one of the teachers, “I’m just trying to save the world”.”   – Pamela French 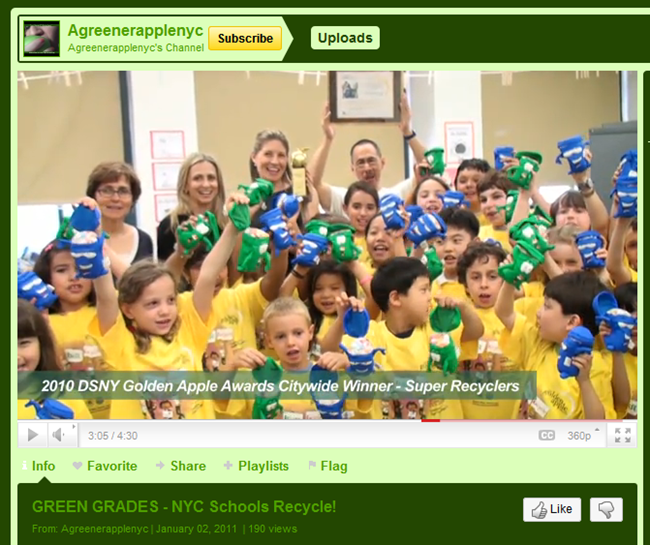